It is becoming ever so easy to become famous these days, and not even for being talented. I believe the rise of micro-celebrities really showed its prominence after the introduction of Instagram in 2010, although the term can be used around YouTube sensations and MySpace stars (pre-Instagram). Urban dictionary (although not reliable but is a concise definition) describes a micro-celebrity as “one who gains a cult or mainstream following due to viral internet distribution. Does not refer to those who have gained limited or cult followings through traditional media.” This definition was created by a user in 2006 and still this idea applies to those “Instafamous” people or bloggers.

For this post I mainly want to look at the Instafamous but it is important to find out the roots of the social media star. The term ‘micro-celebrity’ really came to academic prominence in 2008 when Theresa Senft wrote a book about Camgirls in the age of the Internet and social media. Senft (2008) defines ‘micro-celebrity’ as a technique that ‘involves people ‘‘amping up’’ their popularity over the Web using techniques like video, blogs, and social networking sites’ (p. 25). Marwick and Boyd (2011) also add, “this practice involves ongoing maintenance of a fan base, performed intimacy, authenticity and access, and construction of a consumable persona” (p. 140).

The points that Marwick and Boyd make about ongoing fan base, intimacy, authenticity and consumerism are key aspects in the success of the instafamous. Let’s use social media star Mimi Elashiry as an example. She’s a Sydney dancer who could never cut it as a commercial model, until she took things into her own hands and utilized Instagram to build a following, which in turn created jobs for herself. Post upon post of street style and a new era of “mystical traveler” vibes, people started to gravitate towards her daily posts and seemingly relaxed stylish lifestyle.  Now with over 800,000 followers on Instagram alone, she has maintained a loyal fan base with whom she creates intimacy and authenticity, as well as using her platform to promote products. 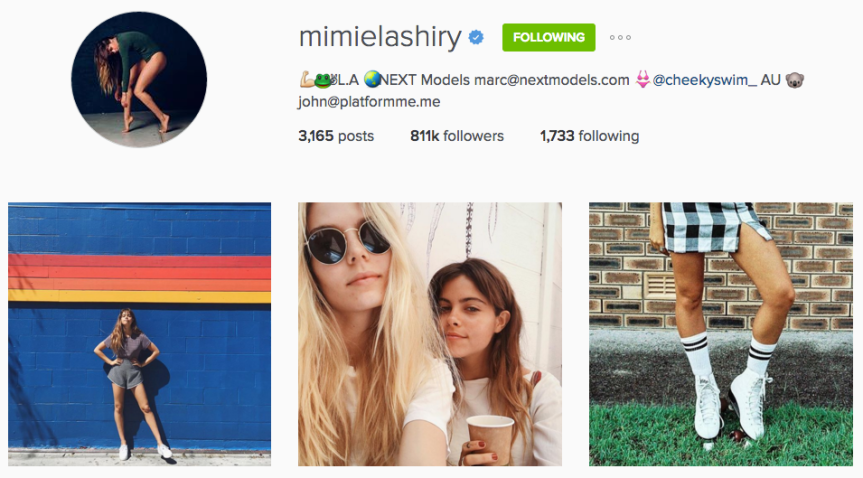 It it funny to note that in Senft’s (2008) book on Camgirls, she writes that “unlike film and television audiences, Web viewers don’t seem particularly interested in purchasing products endorsed by Web stars”. Nowadays, it seems as though the main use for Instagram is to sell products through the Insta-famous. Although, maybe Senft is talking in a sense of campaigns and television commercials. I for one most likely wouldn’t be more inclined to buy Coca-Cola because Jenna Marbles told me to.

The problem with instafame is this newfound need for self-validation. More so than ever, teens are feeling the need to feel validation by the amount of likes an Instagram photo receives. People feel the constant need to post the perfect photo, no matter how long it takes to get it right, just so the world can see them as perfect. But really this is completely unrealistic and creates a whole new debate of self-confidence and worth in teenagers particularly. If you’d like to read more about this, you should check out some of my peers blogs like Ruby Taylor and Lucy Dean.